Light aircraft: the transport of the future?

The air transport sector is in constant flux. Faced with criticism of its impact on the environment (even though it accounts for only 2 to 3% of global CO2 emissions), many projects have been implemented to ensure its sustainability in the near future.

This broad range of technological advances (biofuels, solar energy, electric engines, but also vertical take-offs and autonomous piloting, etc.) are designed to meet the challenges we will face tomorrow, both in terms of the environment, urban development and society.

The first 'branch' of aviation to be affected by these advances is light aviation.

Indeed, before developing these technologies on airliners or wide-body aircraft, manufacturers will first implement them on smaller, easier-to-handle and less energy-consuming models.

For example, the main obstacle to 100% electric aircraft today is the weight of the batteries. At present, if we were to equip an A320 carrying about 150 passengers with batteries, it would add 150 tonnes, which would obviously compromise take-off. This is why electric aircraft tests are carried out on lighter models, such as the "Alice" aircraft designed by the Israeli start-up Eviation Aircraft.

Passenger and business aircraft will therefore be the first to benefit from these innovations in the air.

These aircraft will not only be the main drivers of the transport environmental transition, but also concrete solutions to the urban planning problems we are facing today.

One of the problems cities face today is congestion. When we know that by 2050, 70% of the world's population will be living in large cities, decongesting city centres and providing solutions to the resulting problems (in bulk: traffic jams, accidents, noise pollution, time wasting, etc.) is a priority.

One of the reasons for this influx of people to large cities is an often inadequate territorial network: as it is complicated to move around when you do not live in a large city (due to lack of infrastructure, lack of means of transport, lack of regular lines, etc.) you end up living there.

As these large cities also concentrate a large proportion of the head offices and major administrations, it is complicated for company directors from the surrounding areas not to travel there regularly. This is all the more reason to abandon medium-sized cities and move to the major metropolises.

The problem of congestion is directly linked to another problem: that of the isolation of the regions.

Business flights are already a solution to this problem: by offering direct connections between regions, it saves precious time by avoiding unnecessary stopovers. OpenFly was born out of this observation.

But tomorrow, with the new aircraft models being created, this will be even more true.

First of all, on very short routes: Transcend Air, an American company, has developed several prototypes of vertical take-off aircraft, which it thinks it will be able to market by 2024.

The ability to take off and land vertically will make it possible to avoid airports and traffic jams with direct connections from city centre to city centre.

The aircraft will look more like a helicopter, but will be much faster, flying at a speed of 650 km/h. It will take about 15 minutes to fly from Roissy Charles de Gaulle airport to the centre of Paris, compared with nearly an hour by taxi today.

For longer distances, project are under consideration to link medium-sized cities directly. Boeing, for example, has teamed up with two companies, JetSuite and Zunum Aero, to develop a 12-seat hybrid aircraft suitable for journeys of 1,000 miles (1,609km, equivalent to Lille-Seville). The launch is planned for 2022. At the same time, Alice, the all-electric aircraft from the Israeli firm Eviation Aircraft, which we mentioned earlier, should also take off with nine passengers on board and cover a distance of up to 1,100 km at a speed of 440 km/h. A real alternative for journeys of 500 to 1000 km and an efficient and clean way to drastically improve territorial coverage.

The air route, which allows cities to be easily linked together, therefore appears to be the ideal solution to the problems of both congestion and isolation that we are experiencing today.

2)    Light aviation in the midst of the environmental transition

With the development of electric aviation, which will be implemented first on these aircraft, they will soon be among the cleanest means of transport in the world. It is even reasonable to expect that light aviation will become the most environmentally friendly mode of transport within a few years. This is a difficult idea to imagine in the age of the "flygskam", but it is far from being a utopia.

Most of the electric or hybrid aircraft projects currently involve "private jet" type aircraft, capable of carrying 10 to 15 passengers. These are expected to be commercialised within 4-5 years. In June 2019, Elon Musk, CEO of Tesla and SpaceX, stated that a 100% electric commercial aircraft would be operational by 2024: a revolution in the world of transport.

This should start with hybrid engines: a technology that combines current combustion engines with an electric motor, which could already reduce CO2 emissions by 30%.

Several companies are already in the running. The most advanced on the subject is the American company Ampaire, which flew its hybrid electric aircraft, a modified Cessna 337, in June and which plans to start marketing it in 2021!

As far as 100% electric aircraft are concerned, there has also been a lot of progress: in addition to Alice aircraft, envisaged for 2023 by Eviation Aircraft, there is also the company magniX.aero, which specialises in transforming existing aircraft into 100% electric aircraft. Last December, in collaboration with Harbour Air, North America's largest seaplane airline, the company successfully completed the first commercial flight of a fully electric aircraft. For many, this historic flight heralded the third era of aviation: the electric era.

While we will have to wait a few more years (probably 2040) to see these innovations take hold in traditional commercial aviation, light aviation already embodies this future where aviation no longer necessarily means pollution. 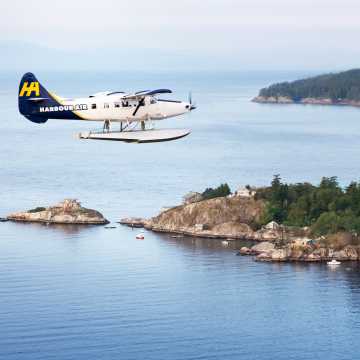 One of the criticisms often levelled at aviation is its cost.

With these new aircraft, however, this cost is likely to decrease significantly. How can this be achieved? Firstly, by reducing fuel costs: less paraffin = less expenditure. Secondly, through a reduction in maintenance costs. These aircraft should require far fewer technical repairs than current aircraft.

The cost of operating the Alice in flight, for example, will be lower than for a conventionally powered aircraft. According to Omer Bar-Yohay, CEO of Eviation Aircraft, this cost should be only $0.10 per mile (1.6 km), compared with about $2 for the Cessna Citation Mustang, the equivalent of a "train ticket".

As a general rule, Alice should enable transport operators to reduce their maintenance and operating costs by up to 70%.

The infrastructure costs of these projects should also be minimal.

In addition to the fact that, unlike rail or road transport, there is no need to build or maintain rails and roads, most of the necessary infrastructure already exists!

Today, in Switzerland alone, there are already almost 40 airports and airfields. In Europe, there are almost 3,500. The future is already here!

How OpenFly fits into this logic

We are convinced that light aviation represents the future of transport.

By exploiting the multiple resources existing in France in terms of aviation (exceptional pool of professional pilots, large number of airfields, hundreds of private aircraft owners willing to rent their aircraft...), and by offering the largest number of people the possibility of benefiting from it at an affordable rate, OpenFly is revolutionising the world of aviation.

And in the future, with the new aircraft we have mentioned, this will be even more true.